This past fall, in CSP26: Fandom and Participatory Culture, Suzanne Scott developed a multimedia approach to teaching argumentation that cultivated student awareness of how medium shapes the message. Students were assigned to create “fan vids” using iMovie, a Mac-based film editing software, that would theorize course concepts like consumption and production, gender, and fan identities, through hands-on engagement in the fan culture practices they were analyzing. 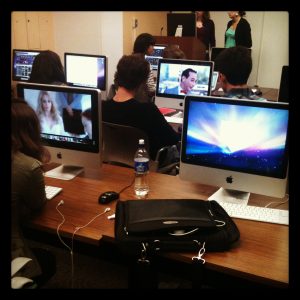 Students pore over media clips in the oMac Lab

Fans create vids by editing visual clips from film and television and overlaying songs that may have previously had no relation. Scott’s syllabus describes vidding as an alternative form of argumentation that de-contextualizes and re-contextualizes source texts, offering critiques and reinterpretations of popular culture.

Like an traditional essay assignment, Scott asked students to consider the major themes of the course, provided relevant source materials for students, and asked them to construct an argument through a synthesis and critique of source materials. The sources themselves, however, consisted of 150 film clips and 20 songs that were uploaded to the server by Mike Redfern and hosted in Moodle with the help of Jay Yip.

Using iMovie in place of a word processing program, Scott explains that she asked students to “juxtapose lyrics and the tone of a song with images to create their argument. They went through [the media clips] like you would pick quotes from an essay to support a thesis.”

Read the full text of the assignment. Check out Scott’s iMovie Walkthrough for students. 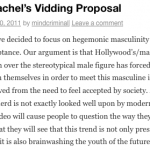 Working in pairs, students first discussed and negotiated their arguments and how to best express their thesis through the available source materials. Students composed textual proposals on the course blog prior to their hands on work with the clips in the oMac Lab. Scott reserved the lab during her class time for a week where she offered an iMovie walk through and assistance as students started work on their projects. Students completed their projects outside of class time using the lab, which is open 24/7.

Scott chose to use iMovie because of its intuitive interface, clear icons, and layout that guides users in a step-by-step process. iMovie has limitations, however. As Scott points out, iMovie presumes users will compose in a sequence from beginning to end, unlike professional editing software such as Final Cut Pro. Tight synchronization of audio and visual materials is also more difficult in iMovie. To address these issues, Scott explained the limitations to students upfront and encouraged them to hand draw a map of their editing plans prior to working in iMovie. Through discussion of the technology’s limitations, students realized the labor and resources involved in producing the fan vids they had been critiquing in class.

In reflecting on the assignment, Scott explains the pedagogical value of unfamiliar media and peer-critique of multimedia work. As peers commented on each others’ work, students became more aware of the difficulties in moving from the argument in their heads to the argument as expressed and understood by their audience. Perhaps more quickly than in the familiar form of writing, students were able to point out the moments where arguments wandered and broke down, where evidence contradicted the thesis, or where alternative arguments could have been advanced. Through the assignment, Scott explains, students became more reflexive about the steps involved in building and communicating an argument.

An example of a finished product:

See the rest of the student work on the course blog