Ever since I started using iAnnotate PDF to grade papers and read articles, I wanted to further integrate my iPad into my pedagogy. One of the easiest ways was to get rid of the attendance sheet planned and printed out from Excel. After talking with Daniel Chamberlain, we decided I should give Gradebook Pro a try.

Gradebook Pro, by Eric Lombardo, is an iOS app that costs $9.99. According to his website, there do not appear to be any plans to develop an Android client. I began using Gradebook Pro [hereafter, GBP] at the beginning of the fall semester of 2012. My workload was a double section of CSP and a 200-level history course; I had the standard 16 students in the CSPs and a roster of 21 in the history class. GDP offers an option to import student rosters via a comma-separate values, or CSV, file. I opted for the old-fashioned manual input. An attractive and useful feature is the ability to import or take pictures of students. After setting up each class, you are presented with three sets of choices: “Data,” “Manage,” and “Action.”

Data allows you create reports about the class as a whole, individual students, and assignments. I did not use these functions, so I will refrain from commenting on them. Although, when I played around with them, they looked to be pretty straightforward. In addition, you can backup your data here. My backup method was to link this app to my Dropbox account.

The next set of options, Manage, is where you can modify assignments, attendance, classes, rosters of classes, and categories. The first four actions are aptly labeled. The last, Categories, allows you to group assignments; my categories were: essays, quizzes, extra, and final project.

The final choice, Action, is used most often. This is where you take attendance and create assignments. 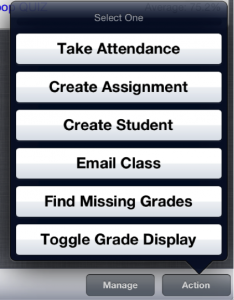 Taking attendance is easy, you have three choices: present, absent, and tardy. If a student is either tardy or absent, you can choose either a thumbs up, which I assumed to mean “excused,” or thumbs down, unexcused. In addition, with the attendance function you can take notes for a particular student for that day’s session.

All in all, Gradebook Pro is relatively easy to setup and use. I will continue to use it next semester when I will try out functions I did not experiment with, specifically the weighted grade option. I assume this will allow me to use GDP to calculate final grades. Since I did not use this function, I just inputted the data from GDP into my Excel grading sheet.

As stated previously, GDP is a useful app. I do, however, have two criticisms. First, GDP does not have a syncing function. I downloaded GDP onto my iPhone and iPad. Since the app saved its data into my Dropbox account, I expected to be able to just download, or sync, the latest data. This was not the case. To do so, you are required to manually save, or backup, your data. This is a two step process of going into “Manage” and selecting “Backup.” I think this should be done automatically at the end of a user-specified time period. Thus, if I wanted to get the latest data on my iPhone, I needed to backup the data from the iPad, with which I primarily used GDP, go back to my iPhone and restore the data recently backed up from the iPad. Again, this should be an automated process. With such a laborious process, I just used GDP on my iPad.

My second gripe about GDP is a trivial one. It does not allow for the entering of letter grades. This is easily enough remedied by inputting 3.3 for a B+, but this should be an easy function to program and implement.

Gradebook Pro is a very useful attendance and grading app. Its target audience is probably primary and secondary school educators, but it can definitely be used at the college-level. That said, I do not know if it is worth ten dollars. I would appraise it to be closer in value to five dollars taking into consideration my general perception of prices in the App Store.