My interest in using the iPad for teaching was, and still remains, multi-fold. My goals included more complicated and ambitious ideas, like using the iPad and mapping apps for fieldwork with research students, and also simpler things like grading and returning graded items to students digitally. However, one of the main things I was drawn to was using the iPad to wirelessly display PowerPoint presentations for lectures. While the display adapter allows you to put your iPad screen on to a secondary display, you may as well just hook up a laptop to the projector since you still have to be attached by a cord. My goal was to be able to walk around the classroom, interact with students, and just get out from behind the lectern.

The first step was to find an app that would allow me to show PowerPoint files correctly. Many of the apps available shift graphics, alter fonts, mangle charts, and make the presentations generally unreadable. The (free!) app I began to use and have stuck with is SlideShark. Using SlideShark is not what I would consider simple, but it works well… with one major exception.

Getting your slides to the presentation screen is a three-step process, though the steps can be done in a few ways. First, you obviously have to make the PowerPoint presentation.

The second step is uploading your file to the SlideShark server, of which you are given 100 MB of space at no cost. More storage can be earned for free by referring friends and colleagues; 25 MB for each referral. This can be done in one of a few ways: The first is by uploading the document to your storage space through the SlideShark website (http://www.slideshark.com), the second is by emailing the presentation to yourself, then opening the document on your iPad through the SlideShark app, and the third is by uploading the file to Dropbox, Google Drive, etc., and opening the file on your iPad through that company’s app. All work very well, but keep in mind that the file still must be stored on the SlideShark server (counting against your 100 MB limit), even if you have uploaded it from another app.

Step three requires that you open the SlideShark app and download the file from the SlideShark server to your iPad, where it will be stored locally within the app itself, no matter how you loaded the file on to their server. Seems inefficient, but it works. 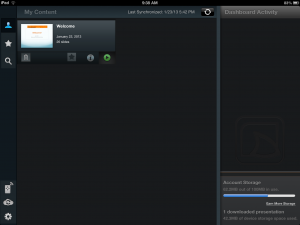 Once it is loaded into the app, there are several options for display (mirrored, presenter notes, etc.) and thumbnails of the next several upcoming slides. An interesting but not terribly useful feature that is included is that you can make a virtual laser point on screen by just pressing your finger on the iPad display and moving it around. 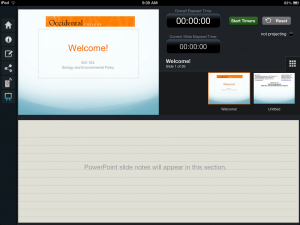 I found that nearly everything I created came through the app without any odd alterations. The major exception is that SlideShark will NOT play some videos embedded in the files, and certainly will not transmit sound. The simple workaround for that is to store the videos on your iPad, switch to the iPad’s built in Videos app, and then switch back once the video is done.

Just using SlideShark alone will let you display from your iPad to the secondary screen (albeit at a slightly smaller scale), though you will still need to physically connect your iPad to the display. Getting it to display wirelessly is a bit more convoluted. There are a few programs that allow you to wirelessly display your iPad screen through your computer screen (like Air Display and Reflector), though I have found that each has an unacceptable lag time and poor graphic quality – not to mention that you STILL need to have another computer attached to the screen to make it work.

My solution was to use an Apple TV that was connected to the wireless network – this allows you to mirror your iPad display through the unit to another display without any loss in quality or any lag time. If your secondary screen has an HDMI input, you should be able to simply connect the Apple TV to the screen and be good to go. However, if you are dealing with a older secondary display that does NOT have an HDMI port, you will need to get yet another adapter. The one I chose was a Kanex ATV Pro HDMI to VGA Adapter with Audio Support. From this device, you can connect a VGA cable and audio cable to the Apple TV and mirror your iPad wirelessly.

There are several other features that SlideShark offers (including sharing of files with students) that I have not explored, but might be useful in the near future when the majority of students have laptops and tablets in class.

If you are willing to purchase an Apple TV and Kanex adapter, switch apps to play video, and go through the hoops to be able to access your PowerPoint file, this will work for you. For me, it hasn’t been worth the time or effort for many of my lectures – bringing a laptop was just as easy if not easier. That being said, SlideShark is quickly making advancements in their app, and there is now SOME ability to stream video (without sound), and our projector is being upgraded to HD soon – when these two events occur, it will be my “go to” app for lecture so I can leave my laptop in my office.